“If we helped to create an atmosphere at determination to work for better health care, on the part of the people themselves, then we have certainly proven something. However, if we have raised expectations and hopes for improved medical care for this area, and it is not forthcoming, then perhaps we have violated a very serious trust, and must be held accountable. It seems to me that the responsibility incumbent upon all of us, by virtue of having participated in this project, is precisely to see that we have not raised expectations falsely or violated a trust placed in us by the people of these communities.” – Karen Blaydes, 1970 Annual Report

My name is Ann Borden Thomas and I am a senior at North Carolina at Chapel Hill. I have been working in the Southern Historical Collection with the Appalachian Student Health Coalition archives for the past several months. As I have browsed the Annual Reports and read student volunteers’ primary accounts I have noticed trust as a common theme. The communities in which health fairs were stationed were often accustomed to misrepresentation by their own leaders and employers. These same leaders often invited the Coalition and as a result, the communities were wary of the Student Health Coalition and often had to be coaxed out of their distrust for medical and legal authorities. In order to accomplish this, the Student Health Coalition made it their first goal to gain community members trust.

In order to establish a mutual confidence between the community and the Health Coalition, student volunteers would often visit the potential site in the spring leading up the summer health fair. This would give the Coalition a basic understanding of the needs of the community and an initial evaluation of whether the people would be open to outsiders coming into their community. Once this step was completed the Coalition had to outline the flow of the health fair in a way that made community members feel valued and assured of patient-doctor confidentiality. This was an important relationship to establish because topics that had the potential to become divisive were often them topics the Coalition wanted to treat or provide counsel for. 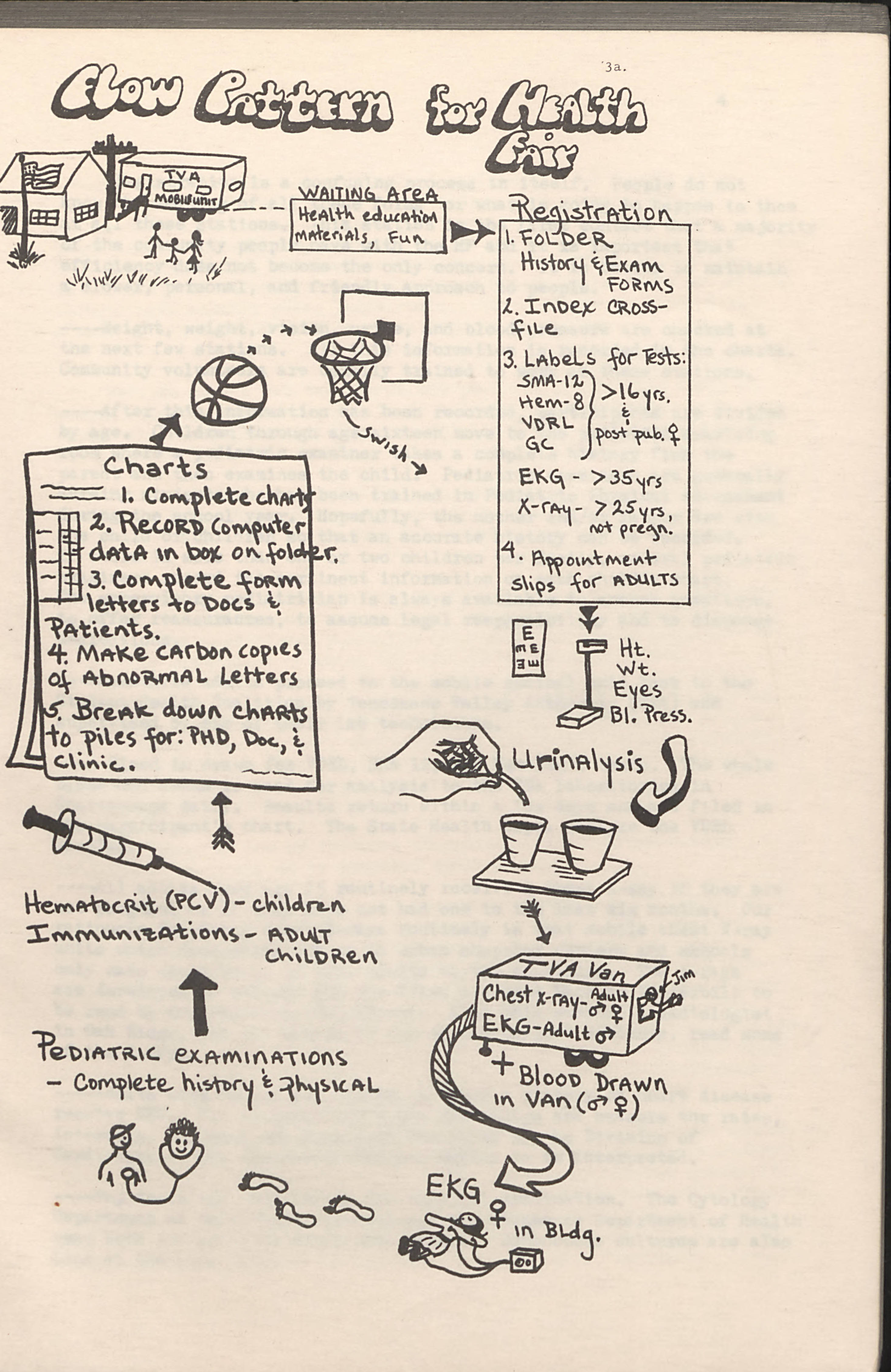 Map of patient movement during their healthcare assessment at health fair, 1974 Annual Report

One of these potentially divisive topics, and the most intriguing to me, was the project on childrearing. The Coalition was often concerned with the conditions of childcare within the homes of community members. The relationship between child and parent was evaluated along with nutrition, development, and education. In rural Appalachia children were often viewed as commodities and did not receive the recommended amount of care and attention according to average age appropriate mental and emotional development. Mothers were often noted as having a “love or hate” approach to their children whereas fathers often played a small role in their child’s life, only offering words for punitive purposed. In the 1970 Annual Report Coalition nurses and doctors note, “a number of fathers were frightened by their own sexual feelings toward their daughters and seek to avoid ‘sin’ by withdrawing from all affection and interaction with their daughters.” As alarming as these reports must have been, they would not have been made if the patient did not trust the Coalition nurse or doctor.

The Appalachian Student Health Coalition’s primary concern, after providing healthcare, was to gain the trust of the community and their patients. Entering into areas that were accustomed to being slighted by their own leaders, it was not easy to establish trust. However, in order to administer the best healthcare possible this step was critical. By establishing trust within the community, the Student Health Coalition was able to return to former health fair sites and continue the momentum they had accomplished in previous years.