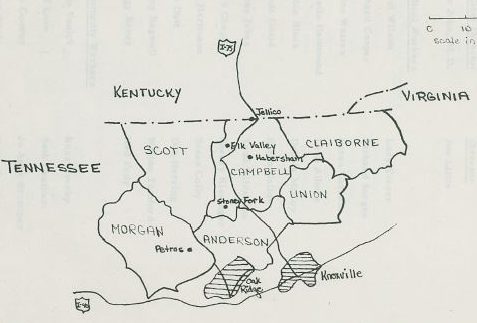 “Petros is a small community (population 1,400) in the northeast portion of Morgan County. At the one time a major coal mining community with several stores and a bank, Petros is now crippled by the decline of the deep mine coal industry. In 1890, Tennessee built a state prison in Petros, which up until mid-1972 employed 180 men, 40 of whom lived in Petros. Because of an attempt to form a guard’s union, the Governer [sic] closed the prison permanently, again adding to the economic difficulties. Because of this, Petros might lose its Post Office and certainly will suffer a decline in population. But if the people leave, it is not because they want to. They will not be happy away from their families, the mountains, and their heritage.

Petros also suffers politically with the county, partly because of geography. It is on the other side of the mountain from Wartburg, the county seat. Wartburg has been designated a growth area, and because of this designation, State and Federal funds are concentrated there.”