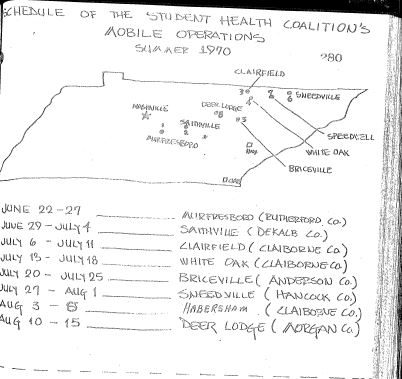 “Population estimates of Briceville, an unincorporated town, place the size at about 1100 people with several hundred more living in the hollows and on the mountains surrounding the town itself. A former mining town, Briceville serves as the center of the 1300 square mile coal field in the northwest half of Anderson County. The land is owned almost totally by three land and mining companies: Coal Creek Mining and Manufacturing, Tennessee Land and Mining and Consolodated [sic] Coal. Though strip mining has been heavy in recent years, indicated coal reserves in the area evidence that the stripping has just begun. Many of the people of north Anderson County are leaving to seek employment in the North[…]. Some subsistance farming and a few large industries like Union Carbide in Oak Ridge provide support for those remaining. A record of the Briceville area income tax returns from 1966 shows that fifty-six per cent of the people completing the forms earned under $3000 a year. With the closing of the major deep mines in the ’30s and ’40s, however, the essential services they once provided (housing and medical care) were curtailed. Social security, food stamps, welfare, and black lung benefits now provide the primary resources of the region.” — Excerpt from “A Summary Report by the Student Health Coalition–Appalachian Project: June 1971-June 1972,” PDF page 18.