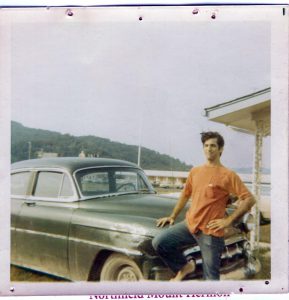 While an engineering student at Vanderbilt University, Charles spent the summers of 1970 and 1971 with the Student Health Coalition. He was 18 years old when he joined the SHC, one of the Coalition’s youngest members. He served as a community worker in Clairfield, Tenn. where, in addition to providing support for the health fairs, he tested the water in everyone’s private wells and made recommendations to improve water quality when necessary.

Charles is pictured here beside “Buddy Sid,” the name of the car that he drove in the mountains during his summers with the SHC. He contributed this photograph to the SHC archive in November 2019, along with the following description: “Buddy Sid was donated by a used car dealer in Briceville. It was a Chevy with a two-speed Powerglide transmission. Sometime during the summer, second gear gave up – which made it impossible to drive on the highway, but for driving in the mountains it was fine. Up the mountain in first gear, and down you go in neutral! Thar she blows!”

Charles did not finish his undergraduate degree at Vanderbilt. As he noted many years later, “one of my motivations for dropping out was the realization that I could do something useful, meaningful, and make a living without the degree. I learned this from the SHC.” In the Spring of 1972, he flew to Amsterdam and convinced a fellow SHC alumnus, John Davis, to join him in hitch-hiking to Athens. They then hopped on a plane to Tel Aviv. Charles was headed to Ein Karem, a small village outside of Tel Aviv, where he had arranged a job for himself as an assistant gardener at Notre Dame de Zion, a community of French nuns. Never ones to turn down an offer of free labor, the Sisters were easily persuaded by Charles to take on his traveling companion as an assistant to the assistant gardener. John returned to Amsterdam after eight weeks, but Charles remained at Notre Dame de Zion for nine months.

Charles moved into a small house outside of Jerusalem and later joined a yeshiva to study Torah. He eventually settled permanently in Israel. In the fullness of time, Charles became known as Zvi, got married, had nine children, and is presently blessed with 31 grandchildren. He has worked since 1982 as a multimedia technician at Aish HaTorah in Israel.

[Story contributed by John Emmeus Davis, 2015] At one emotional pole of the Coalition experience was the gravity and ferocity of the organization’s founder, Bill Dow. He usually displayed little patience for peers whose personal commitment to the SHC’s Appalachian… Continued

The story behind the photograph

[Story contributed by Richard Davidson, M.D.] After an initial scouting year in the summer of 1969, the Student Health Coalition (SHC) began health fairs and community organizing in Appalachia in the summer of 1970. After several months of hard work,… Continued