Professional nursing underwent a cataclysm of change during the active years of the Student Health Coalition.  From the beginning, students in the Coalition nurtured those changes.  Without a political agenda at least at first, young nurses and nursing students who joined the Coalition embraced a fundamental mission to build a practice based on the needs of the communities.  As their embrace brought them up against opposition from existing health care culture and state and federal law, they helped to craft action plans to change culture and law.  Eventually, nurses, alongside their medical, legal, and community partners, became powerful spokespeople for community health needs, including the need to expand existing nurse practice paradigms. 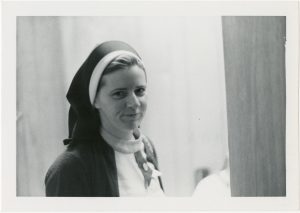 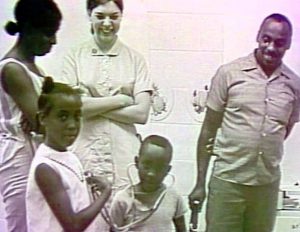 Ann Baile Hamric meets patients at the Smithville Health Fair, Summer 1970. The commitment to robust followup after health fairs was first developed by Ann and the nurses at Smithville. 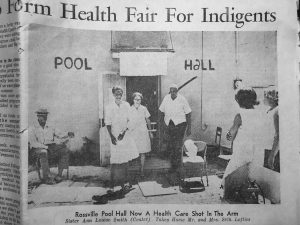 Dana Ellis, RN, and George Smith, MD, were student co-directors in West Tennessee in 1973 and 1974.  They worked with community leaders including Square Mormon, pictured center here, at the Health Fair venue, Rossville TN 1973. 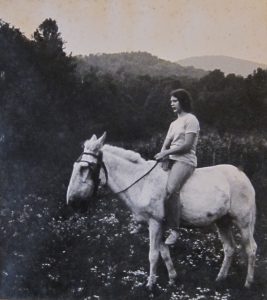 Rosie Hammond, RN, on a mule up near Briceville TN, 1971, at the home of community leader Byrd Duncan. Rosie participated in community follow-up and home visits based on findings at health fairs, as well as serving as a pediatric examiner in the summers of 1971 and 1972. 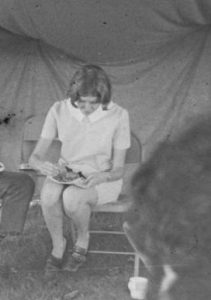 Carolyn Burr on a lunch break in 1971. Carolyn has devoted a lifetime career in public health research, especially on AIDS transmission in newborns,deeply influenced by the Coalition experience.