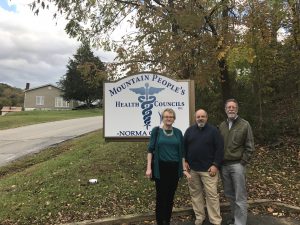 Norma, Tennessee is one of the original three communities that came together to form Mountain People’s Health Councils.  Norma is in the southern part of Scott County, Tennessee,  a county that was once one of the leading coal producers in the state. Norma was at one time a prosperous community with coal mining and timbering.  Norma had a large lumber mill, several large company stores, a clothespin factory, a high school and a full-time doctor.

By the early 70s, the lumber company had closed. One brick wall of the mill remained standing as a reminder of the old days.  One company store had the town post office in the front corner; the other company store became the elementary school.  The high school was eventually moved to Huntsville.  About that time the only doctor in Norma was robbed and murdered

By the time the Student Health Coalition (SHC) came to Norma, in 1973, Norma had one paved road down a narrow valley with many folks back in the hollows.  The muddy New River flowed past the fields.  There were several churches, one store, and a large coal tipple where the strip miner’s coal was loaded onto railroad cars for the trip North.

Norma remained as the center of several other surrounding communities – Fairview, Straight Fork, Mill Branch, Montgomery and Smokey Junction.  Each town ran into another on the main road.  That brought the immediate population to slightly more than 1000.

Most of the job opportunities had moved to Oneida, the largest town in the county. Most of the people of Norma and surrounding communities were either retired, worked in Oneida, or were unemployed. Some still worked at logging, a few worked on the railroad, and a some worked in the few strip mining jobs or in one of the small deep mines. After their town doctor, John Chambers, died, people in Norma had to go to Oneida (30 miles away) to see one of the five doctors there who served the entire county and much of the surrounding area.

Scott County had never had a Student Health Coalition (SHC) health fair. However, several people in Norma had heard about the Coalition from people in Stoney Fork, where there had been a health fair in 1972. They expressed an interest in having a health fair in their community. The SHC students then came to visit several individuals in Norma, and some of the smaller surrounding communities. Because there was a great deal of community interest, the SHC decided to hold a health fair in Norma. Before that decision was made, there had been no large community meeting and only basic groundwork had been done. This made the community workers’ jobs more difficult at the outset because they had to disseminate information widely.

Shortly after the SHC community workers arrived, a community meeting was held that was attended by Kate Bradley from Petros, the site of a health fair the previous summer, and Bob Hartmann, the Director of the SHC for East Tennessee in 1972 and 73.

There were two families that were very involved in the Norma clinic beginning with the health fair when they hosted students from the Student Health Coalition.  Maynard and Mertie Adkins were among those who hosted.  Another family was Vergil and Tillie Burress.

In 2019, a SHC alum, Diane Lauver, interviewed two of the Burress daughters – Janet and June – about their memories of the health fair.  They were asked why people like Vergil and Tillie were open to having strangers stay with them.  “That’s the way it was,” said Janet and June.  “People in this area are very giving” and when it came to the SHC volunteers it worked both ways. People were trusting, and they wanted the health fair and clinic for their community.

During the interview, Diane read a letter from another SHC alum, Diane Cushman.  Diane had stayed with Vergil and Tillie during the Norma health fair.

The health fairs in Norma were conducted in June and August of 1973 in the gym and cafeteria of Norma Elementary School.  Janet and June Burress remembered that there were long lines but people didn’t mind waiting.  Often whole families came to the health fair.

The SHC volunteers saw 507 adults – 187 males and 320 females. About 50 percent of those screened had seen a physician within the previous two years. Among the women, 12 percent gave birth outside a hospital and 8 percent had experienced pregnancy complications. About 76 percent used birth control but only 12 percent had had a pap smear.  The most prevalent diagnosis among the adults was heart disease.

There were 302 children screened at the health fairs; 38 percent of them had a positive history of worms.  The vast majority of the children had the required childhood vaccinations, ranging from 75 percent for tetanus to 84 percent for rubeola.  The most prevalent diagnosis for children was dental carries (30 percent).

After the health fairs, a group of community leaders in Norma, some of whom had hosted SHC students and helped organize the health fairs, decided to form a health council and develop a clinic.  The Norma community had the advantage of having a facility available that could house the health clinic.  The previous town physician, Dr. Chambers, had a vacant office that was on the Norma Road, across the road from his former residence.

The Norma Health Council assumed responsibility for raising funds to renovate the office and equip it. Maynard Adkins and Vergil Burress did much of the renovation, including flooring and paneling.

The Norma Health Council hosted singing groups who performed to benefit the clinic in the elementary school gym.  These included the Coffey Family and the McKameys, a couple with two young daughters who became a nationally-recognized singing group.

One favorite fund-raising effort was a Cake Walk that was held before and after the clinic opened.  One year the Norma Health Council hosted a basketball game between a team from Norma High School and a team that included Bob Hartmann and other clinic staff.  Bob was the National Health Service Corps physician for Mountain People’s at that time and had been a SHC leader for several health fairs in East Tennessee.  People paid a small fee to see the game and for refreshments that were served.  People bought chances to win a sheet cake that was beautifully decorated with the image of Bugs Bunny.  At half time, people who bought chances started to walk around the gym while music was playing.  When the music stopped, the person standing in front of a pre-determined spot won the cake.

The clinic was incorporated on August 6, 1973 as the Area Health Center in Norma, governed by the Norma Health Council.  Those who signed the incorporation document were Raymond Jeffers (the Superintendent of Schools for Scott County who eventually became the chair of the Mountain People’s Board of Directors), Donald Jeffers, June Burress (who eventually became an outreach worker at the Area Health Center) and Maynard Adkins (who was one of the leaders who worked with SHC organizers)

The clinic opened in the summer of 1974. The first staff were Debbie Lay who was the receptionist; Janet Burress who was the clinic assistant; and June Burress Sharpe who was the outreach worker.

The first Mountain People’s physician from the National Health Service Corps (NHSC) was Rick Davidson, who had been a student volunteer with the SHC when he was a medical student at Vanderbilt.  The first NHSC nurse practitioner in Norma was Sally Kimberly, a nurse midwife who trained at the Frontier Nursing Service in Kentucky.  Sally was well-accepted in Norma.Unlike the typical NHSC volunteer who left after a year or two, Sally stayed in Norma for 8 years, providing clinical stability to the practice, even as the physicians rotated through every two years. At one point the NHSC  told Sally they usually didn’t let clinicians stay that long, but they apparently knew it would be hard to replace Sally. After 8 years the NHSC finally notified Sally that her tour of duty was done.

Sally and the other nurse practitioners (NPs) who worked at Mountain People’s in the early days were pioneers, playing a role as clinicians that was unfamiliar to the communities they served. In fact, Sally was one of the nurses to take the first certification exam for family nurse practitioners in 1975.  In a 2019 interview, Sally contrasted her style of practice with that of the local physicians the community was familiar with.  The local physicians didn’t explain things to patients the way Sally was trained to do.  To Sally patient education was a critical part of her role.

When she left Norma, Sally said the only way the clinic would survive is if they could get a local nurse practitioner to work in Norma. Eventually a local nurse practitioner named Betty Stanley who had worked at the Scott County Health Department took Sally’s position when Sally left.  Like Sally, Betty was very popular with patients. She was followed by Judy Yancey, and then Melissa Justice, also local. At one point the clinic was closed for about a year because Mountain People’s could not find an NP who was willing to drive along the winding Norma Road to work at the clinic.  When James Lovett became the CEO of Mountain People’s, he recruited Dee Dee Sharpe to be the Norma NP.

There were three other NHSC physicians that followed Rick Davidson, who worked at Mountain People’s while Sally was the clinic’s NP.  They were Alan Miller, Bob Hartmann, and Trish Woodall.  Bob and Trish had been volunteers with the SHC while in medical school.

After the health fairs in Norma, Bill Dow, another SHC volunteer, worked with the health councils in Norma, Petros, and Stoney Fork to create Mountain People’s Health Councils (MPHC). MPHC was the entity that applied for Federal funding through the Rural Health Initiative, Section 330 of the Public Health Service Act and the National Health Service Corps (NHSC) for placement of one physician to circuit- ride among the three clinics, each of which was staffed by a full-time nurse practitioner.

The Norma Clinic in 2020 looks very much like it did in 1974.  There is a porch that was added over the front door and an addition on the side of the building that houses space for staff and lab services.  Unlike the early days of the clinic, there is no pharmacy in the clinic.  Patients receive written prescriptions to fill at local pharmacies.

In 2017, Rick Davidson, Irwin Venick and Caryl Carpenter visited the Norma Clinic.  Rick was the first MPHC physician, Irwin was a volunteer with the SHC in East Tennessee, and Caryl was the second administrator at MPHC.  They were joined by Biff Hollingsworth, an archivist from the the University of North Carolina library.

Norma is the only one of the three original Mountain People’s clinics that remains open.  Norma and the other clinics in MPHC today have had a significant impact on the people of Scott County.  They now serve over 50 percent of the county population.